Gymboree Rumored To Be Prepping For Bankruptcy, So Use Your Gift Cards Now by Laura Northrup
Tuesday April 11th, 2017 at 9:14 PM

Do you have a Gymboree gift card, or items to return or exchange? Stop putting that shopping trip off, because there are reports that the debt-laden children’s clothing retailer and enrichment class provider might be preparing to file for Chapter 11 bankruptcy soon.

The chain hasn’t turned a profit since 2011, before most of its current customers were born, and is facing the same problems as other mall and apparel retailers. The chain has a total of 1,300 stores at a time when running physical stores has become a burden for some companies.

“People with knowledge of the matter” tell Bloomberg that the retailer wants to reorganize its debts, perhaps trading control over the company to its lenders instead. Gymboree was debt-free at the time of its buyout by Bain Capital in 2010, but now has over $1 billion in debt, with a large interest payment due on June 1 of this year.

Gymboree competes with other children’s clothing brands as well as discount and department stores. The company also owns the high-end and discount brands Janie and Jack and Crazy 8, which are separate chains, as well as Gymboree outlets.

Companies typically give customers 30 days after a bankruptcy filing to use their gift cards, which is why you should dig yours out of the desk drawer if you have any.

Gymboree would be the first kid-oriented brand to file for bankruptcy in 2017, but retail bankruptcies are piling up, with more in the first quarter of the year than in the entire year of 2016. 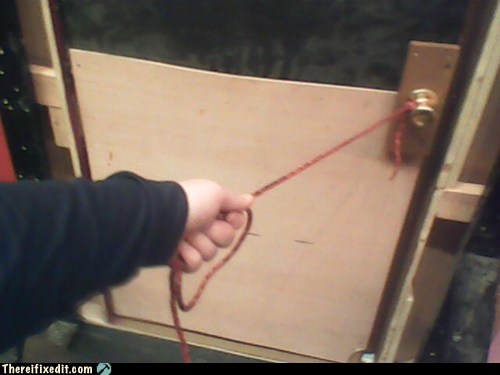 Stage door would fall open, so had to keep it shut and pull it closed after actors went through it.

cmannes
reply
Another reason why I stuck to lighting in college.
Maple Grove, Minnesota

In one of the coolest zero-g cover songs ever recorded, Canadian astronaut Chris Hadfield does a heartfelt rendition of David Bowie's classic before returning to Earth.

How do you top months of amazing photos, demos, and tunes done aboard the International Space Station? If you're Chris Hadfield, you cover David Bowie's "Space Oddity" in a showstopping finale.

On the eve of his return to Earth, the Canadian astronaut released a beautifully done video of himself singing the 1969 classic.

Mixed with the help of staff at the Canadian Space Agency, musician Emm Gryner, and others, the cover features a somber piano intro and modified lyrics that reference the Soyuz capsule that will return Hadfield to Kazakhstan.

When the mustachioed commander sings "I'm floating in a most peculiar way" while actually floating up in space, Hadfield wins the Internet, as one commenter suggests.

The video, meanwhile, has some stunning shots of the station zooming over our planet, as well as Hadfield's acoustic guitar drifting through a module in zero-g. Check it out below.

Hadfield handed over command of the station on Sunday to Russian cosmonaut Pavel Vinogradov. He commended its six-person crew, which organized an unexpected spacewalk on Saturday to repair an ammonia coolant leak.

Organized with unprecedented speed, the spacewalk by Americans Chris Cassidy and Tom Marshburn replaced an ammonia pump on the station's P6 truss, and they reported seeing no more ammonia flakes coming from the area. Ammonia is used to cool the solar panels powering the ISS.

Marshburn and Russian Roman Romanenko will board the Soyuz spacecraft on Monday evening with Hadfield, who has spent five months on the ISS.

During that time, Hadfield has shown Earthlings how to play guitar in zero-g, safely clip one's fingernails, and even how to cook spinach.

In the process, and along with his eye-popping photos of Earth, Hadfield has become an Internet sensation, conducting Twitter conversations with fellow Canadian spaceman William Shatner--much to the delight of the former's 770,000 followers. Warren Buffet thinks buying gold is dumb: specifically, he thinks that buying gold is speculation, not investing, because gold doesn't do anything productive. Here, he waxes eloquent on the subject:

“If you put your money into gold or other non-income- producing assets that are dependent on what someone else values that in the future, you’re in speculation,” he said. “You’re not into investing....”

To illustrate the point, he asked readers to picture the world’s entire gold stock melded together into a cube 68 feet (21 meters) on each side valued at $9.6 trillion at then- prevailing prices. For the same amount, an investor could have purchased all the farmland in the U.S., 16 replicas of Exxon Mobil Corp., and still have about $1 trillion of “walking- around money.”

A century later, the farmland will be producing valuable crops no matter the currency, and dividends from the companies would probably added up to trillions of dollars, Buffett wrote.

The 170,000 metric tons of gold “will be unchanged in size and still incapable of producing anything,” he wrote. “You can fondle the cube, but it will not respond.”

Mr Buffet has a lot more faith in the longterm health of soil in an agribusiness context than I do, but the point is still an interesting one.